The Penn-York Valley (referred to locally as The Valley) is a group of communities that straddles the New York and Pennsylvania border.It includes the villages and boroughs of:

Due to geographic boundaries, the Penn-York Valley is broken up into two Census regions: the Binghamton metropolitan area and the Sayre micropolitan area. The Valley is part of the Twin Tiers.

The community saw historic flooding due to rain from Tropical Storm Lee, exceeding levels of the Mid-Atlantic United States flood of 2006. Damages in Tioga County alone were estimated at around $100 million.

The valley has three local bus services, the first is Ride Tioga. Ride Tioga stops throughout Waverly, Sayre, and Barton. The second is Blue Bus. Blue Bus makes numerous stops in Waverly, Sayre, and Athens, the third is C-TRAN operating out of Elmira and making daily stops in Waverly, Wilawana, Chemung and points west. Shortline Coach USA and Greyhound regional bus services stop in Waverly, as well. The village also has taxi service available through Valley Taxi which travels throughout the vicinities of Waverly, Sayre, Athens, and Binghamton. The valley is also conveniently located between the Elmira-Corning Regional Airport in the Town of Big Flats and the Greater Binghamton Airport located in Maine, New York, both of which are medium-sized regional airports serving the Southern Tier of New York. 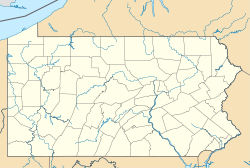 In May 1870, a Waverly banker named Howard Elmer, along with Charles Anthony and James Fritcher, bought the Pine Plains area between Waverly and Athens. Elmer convinced Asa Packer to locate a new railroad repair facility on the Pine Plains for the expanding Lehigh Valley Railroad, which was making a push north to connect to the Erie Railroad at Waverly. Robert Heysham Sayre, president of the Pennsylvania and New York Railroad, helped cement the deal. The town was named in his honor. Sayre was incorporated on January 27, 1891.

In 1904 when the locomotive shops were built at Sayre, the main shop building was believed to be the largest structure in the world under one roof, but held that title for only a brief time. The railroad operated from 1870 until 1976, but maintenance facilities were shifted away before that. With the decline of industry, population has declined since 1940.

Sayre is located at 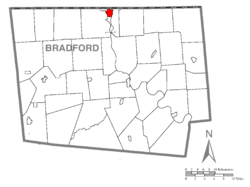 41°59′1″N 76°31′15″W / 41.98361°N 76.52083°W / 41.98361; -76.52083 (41.983567, -76.520845) in a river valley in the Allegheny Plateau just north of the confluence of the Susquehanna River and the Chemung River, along with Athens, Pennsylvania, South Waverly, Pennsylvania, and Waverly, New York. Together, these small towns make up the greater area known as the Penn-York Valley, or just "the Valley". The New York / Pennsylvania border cuts through the valley. There is no physical border between the towns, as the grid of streets and avenues blend seamlessly from one town to another. Sayre is bounded on the east and west by Athens Township, on the south by the borough of Athens, on the northwest by South Waverly, and on the north by Waverly, New York.

Pennsylvania Route 199 passes through the borough as Keystone Avenue, Mohawk Street, and Spring Street, ending at Interstate 86 just over the state line in Waverly, New York. Via I-86 it is 17 miles (27 km) northwest to Elmira, New York, and by New York State Route 17 (future I-86) it is 38 miles (61 km) east to Binghamton, New York.

There were 2,479 households out of which 27.3% had children under the age of 18 living with them, 39.9% were married couples living together, 11.7% had a female householder with no husband present, and 43.8% were non-families. 37.3% of all households were made up of individuals and 16% had someone living alone who was 65 years of age or older. The average household size was 2.23 and the average family size was 2.94.